Splashes of color can add excitement to a runner’s stride and that is exactly what happened Saturday, May 7, on U.S. Naval Station Guantanamo Bay, Cuba, as the Color Me GTMO 5K run kicked off from Cooper Field. 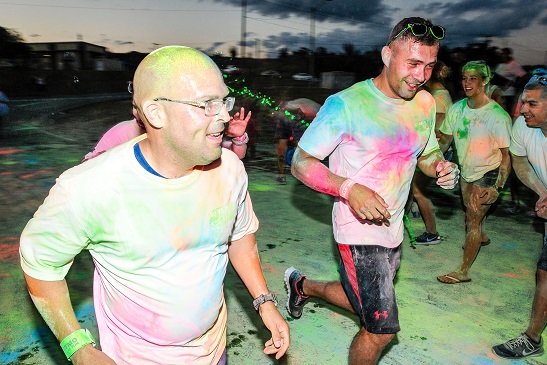 The team with the fastest time in the Card Board Regatta race this past Saturday holds up their winning boat, the Narwhal Yawl near ferry landing on U.S. Naval Station Guantanamo Bay. Navy Lt. John Kimmel and Lt. j.g. Andrew Roley, started their construction early on but made the decision to name it the Narwhal Yawl on the day before the race.

Many participants signed up for the event this year including Joint Task Force Troopers, NSGB service members and their families, as well as contractors and civilians. Each person received a pair of colorful sunglasses, a white event T-shirt with this year’s logo on it that by the end of the run took on the look of a masterful Picasso painting. This was not a timed race, giving participants the chance to walk, run or jog and have a great time with friends and family.

Color runs have become a popular event in many cities back home, so why not bring them here to the island?

This event is usually held at least twice a year here on island, and is one of the more anticipated events hosted by the Morale, Welfare & Recreation team according to the MWR website.

Throughout the run, stations were set up by volunteers and service members allowing them to blast the runners with a plethora of different colors, from red to green and all colors in between. Not one person was safe from being splashed with color, from the runners to the volunteers and even the bystanders watching the event take place.

By the end of the run, everyone crossing the finish line at the Windjammer Patio looked like a human rainbow. Each participant was covered in multicolor paint from head to toe. Runners were hugging and taking pictures with one another; children were making colorful piles of the leftover powder on the ground and throwing them at each other while the huge crowd of supporters cheered and laughed at all the colorful participants. “It was probably the most colorful race I have ever been a part of,” said Spc. Cameron Ashley, one of the JTF Troopers who participated in the run.

According to India’s history, these types of runs are based off of a Hindu spring festival, Holi, held throughout India and Nepal. It is better referred to as the festival of colors or the festival of sharing love.

If you missed out on this colorful fun run, do not worry; another one is being scheduled by the MWR, so put on your white clothing and get ready to get colorful.