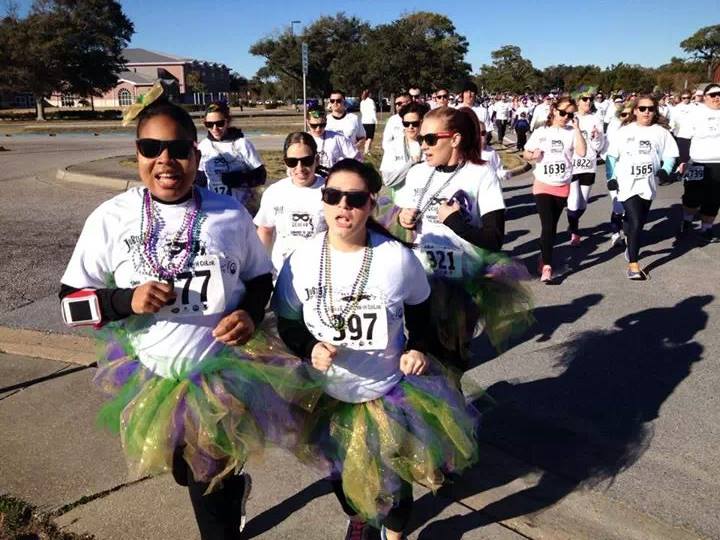 Jubliee by the Bay 2014 with PurColour

Plumes of purple, green and gold billowed up from the streets at Pensacola Naval Air Station on Saturday, but rather than the remnants of whimsical munitions, these colorful clouds were just the signs of a reveling good time.

The second Jubilee by the Bay Run, Walk, or Drag with Color drew about 2,500 people out to NAS on a brisk Saturday morning with the dual promise of a run like no other in the area and a kicking after party.

“It’s just something fun,” said Amy Newman, executive director of Jubilee by the Bay and Pensacola Mardi Gras. “There’s no set times. There’s not set rules of any sort. It’s like when you were little and you liked to play in the mud, but you can be a grown-up.”

Runners showed up in all sorts of frilly, shiny, springy headgear — and there were more than a few tutus — but everyone wore the same white race T-shirt.

By the end of the race though, there was neither shirt nor runner left untouched by the Mardi Gras colored corn starch that was hurled at the runners as they trekked the roughly 5K course.

Saturday’s run was not a race. Runners were not timed, and no winner was declared. But that didn’t keep some of the more avid runners from pushing themselves ahead of the pack.

University of West Florida senior Drew Kennedy, 21, was first to cross the finish line in just over 19 minutes. Despite his performance, the graphic design major said it wasn’t the run that drew him to Saturday’s event.

“I’m here for the party,” he said as he wiped green dust from his teeth.

In fact, colored teeth were a theme at Friday’s run, which is why Nikki McLendon and her friend Jocelyn Kelly stood out.

Though doused in color like everyone else, the two ladies’ teeth remained impeccably white. It turned out the two were color run veterans, having participated in last year’s event in downtown Pensacola.

“You learn to keep your mouth shut,” McLendon said “You hold your breath, close your eyes and walk very fast.”

The decision to move the color run to NAS this year came about when the air base reached out to Jubilee to help kick off its year-long centennial celebration, Newman said.

Jubilee officials haven’t yet settled on a location for next year’s run.

View all posts by cnash →